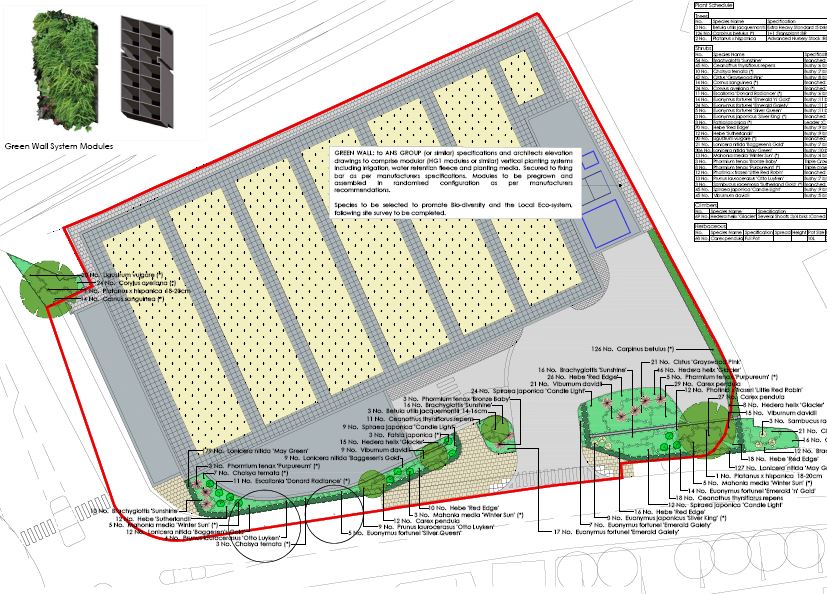 Lidl is amending again their proposal (planning application 2017/2972) in order to take into account the concerns from residents. They have:

In a previous article published in August we said:

“Staff car park (4 spaces) at surface level should be moved inside the car park, as a compromise between the needs for the site and the limitations from the London plan. At least a tree could be planted as represented in some drawings provided by the developer.”

They have also taken into account our comment regarding the level of Electric Vehicle Charging bays, which now meets the London Plan standards. Instead of 2 active rapid charging bays they are now providing 14 bays! (with 4 more passive bays to be provided)After amendments, the provision of rapid charge points are well suited to supermarket locations and TfL finds this suitable.

The officer’s report recommends also to add a condition to provide a pedestrian crossing on Flacon Road with “an alternative material, potentially something that relates to the Clapham Junction ‘exemplar project’ material palette”

In addition, we’ve noticed that both the Battersea Society and the Officer’s report are criticising the proposal for not complying with the local plan’s aspiration (Site Specific Allocation Document and PL13). In addition the report says that the proposal fails to “to ensure that previously developed land and vacant and under-used buildings are maximised, taking into account of the suitability of sites for high density mixed use development and the various impacts that the development would have (Policy IS1a)“.

A more worrying part is the following paragraph (1.4) where the officer implies that the scheme should only be considered as an “interim”  development, for the next 10 years only and still seek for “a more suitable and comprehensive re-development of the whole of the SSAD site comes forward in the future“! Later in the report (parag. 3.5) it repeats the character of “partially temporary nature” to call it acceptable.

Once again it appears that Council’s officers would have been happier with a few 25 storey towers as they currently fancy along York road.

Fortunately that fact that Wandsworth Council officers persist to consider that this is an area suitable for skyscrapers and tall buildings – both opposed fully by local residents – should not prevent developments to be respectful of local resident opinions!

We must commend the efforts of Lidl to not only listen but also address the concerns from the local resident and community groups. The fact that they do not comply with the flawed SSAD (criticised already several times – not only by CJAG – search for Falcon Lane in that article for example) should actually be praised. Unfortunately it was confirmed also at the Clapham Junction Town Centre Partnership Board (CJTCPB) meeting that business representative, along with the Chair of the Battersea Society, agreed too that it was an unfortunate under-development (shall we assume that they would have applauded a few towers for the location? And we will remember that back in 2008, the CJTCPB was not shocked by the proposed 42 storey skyscrapers at the station!).

We consider that they have been very proactive in their consultation, and we must highlight that they have always responded quickly and accurately to our emails/phone calls. Their final scheme meets most of the comments received and therefore should be supported.

UPDATE 21/09/2017: Following the planning application committee yesterday, the scheme was approved unanimously. Labour Cllr Belton commented that the developers were praised for their consultation (which, he said, was rare enough to mention). He also said that he was a bit disappointed as the developers could have had a more ambitious project and that was not completely satisfactory in his view. He also mentioned about possible impact of Crossrail2 and that the 10 years period was fitting well in the agenda. Tory Cllr McCausland asked for a few details on the application and Tory Cllr Heaster talked about the Railway conservation area.

In addition to the proposals in our planning application we have been considering different options to make improvements to our Clapham Junction store. This included a modernisation option which has now been carried out. We continue to consider options for further development, but there are currently no plans to make any further changes to the store in the immediate future.

They have also confirmed that application 2017/2972 is now on hold.

CJI editor and Clapham Junction Action Group co-founder and coordinator since 2008, Cyril has lived in Clapham Junction since 2001.
He is also funder and CEO of Habilis-Digital Ltd, a digital agency creating and managing websites and Internet solutions.