A former plan of a vast development including 6 skyscrapers up to 60 storeys has been scrapped in Paris and the local authority has now presented a much lower and eco-friendly proposal on the same zone.

Four years ago, Paris approved the planning permission for a huge redevelopment project including 6 skyscrapers located on the edge of the east side of the city. A green light obtained narrowly with part of the majority voting against, and only approved thanks to communist and center-right councillors.

While the mayor of Paris was promoting a “new proof of our ability to innovate for the attractiveness of Paris and the improvement of the living environment of Parisians“, opponents were criticising  the “over-density” and an “urban development which is a relic from another time“, a “megalomaniac vision” with “phallocratic towers“.

A developer’s dream with the blessing of Paris’ mayor…

Under the vision of Richard Rogers, a British architect (he notably designed in 1977, with Renzo Piano, the modern Pompidou Centre in the center of Paris), the new scheme was going to include six skyscrapers from 85 meters (about 18 storeys) to 180 meters (about 60 storeys) and many other buildings.

The vast project comprised hotels, office towers to welcome 13,000 jobs,  residential blocks to house 9,000 people, a swimming pool and leisure centre, a school, all along a two-hectare garden (20,000 sqm).

With the price of the land (allegedly made very expensive by the SNCF, the state-owned railway company), the local authority said that they did not have any other option but to build high towers, and that the usual 6 storey building, typical of Haussmannian buildings, would be totally unviable.

… all cancelled for a new “low-rise” scheme

In April 2022, the City Hall cabinet member for housing confirmed that the scheme would be constructed… but in a completely different way from the original proposal granted in 2018.

During the 2020 local elections, the Green party linked its support to the current mayor with the full review of this project. In 2018 they presented an alternative project, not far from what has actually been granted.

As a result, the main urban redevelopment project in Paris has been completely redesigned and from Richard Rogers’ original project, not much is left.

The new proposal has been drawn by Loukat Leclercq Associés. It will have double the amount of green space and half of the offices and accommodations. The construction footprint changes from 515,000 sqm to 230,000 sqm.

All skyscrapers have been abandoned: accommodation buildings won’t be higher than 50 meters or 16 storeys and officers blocks won’t go more than 35 meters. The new project will promote affordability, with 57% of the housing to be social-rent and 19% intermediate, which means that more than three-quarter (76%) of the all the residential homes will be affordable.

Still too tall for many community groups and amenity societies, but at least less than half of what was planned before. And the Paris City Hall has said that they are still open to discussions and could explore feasibility of other options to lower the size of some buildings. 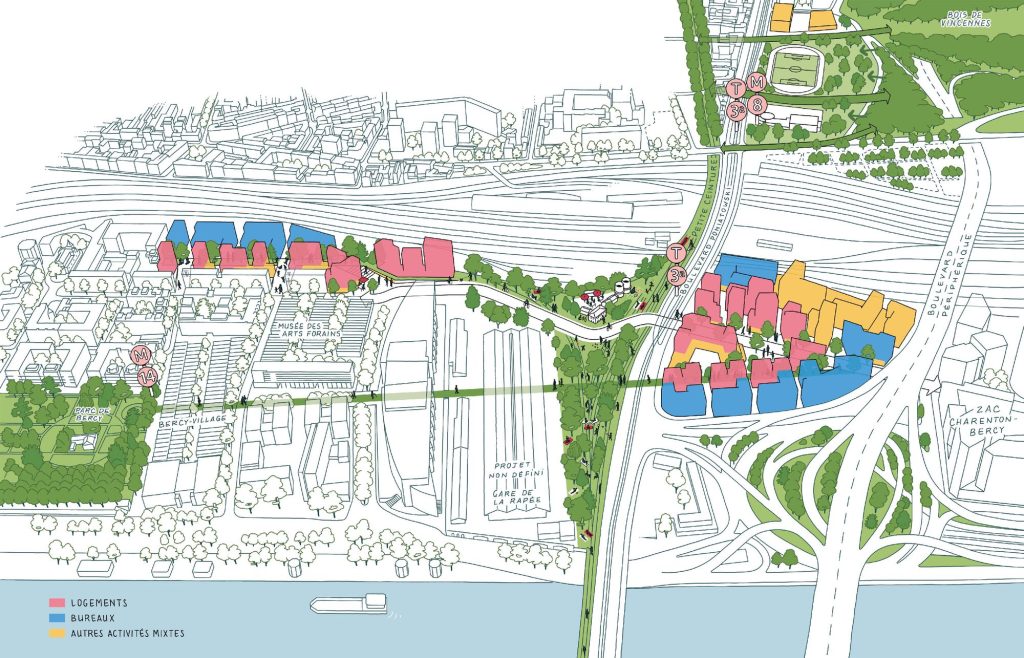 A garden of nearly 40,000 sqm will be created with paths reserved for pedestrians, cyclists and buses only.

A lot less construction (building on a concrete podium slab, a lot more carbon hungry than plain soil, as been dropped), flexible offices with the possibility to transform them into housing in future has been favoured. The new proposal comprises 40% housing, 40% offices and 20% mixed activities with a target of 3,500 inhabitants and 3,900 jobs.

In total 5,000 sqm will be dedicated to social businesses, 6,000 sqm for local shops , 12,000 sqm  for public equipment including two nurseries,  two primary schools, one secondary school, two swimming pools and a gymnasium.

Some existing buildings, including the former train station which should become a logistic factory, have been preserved. The town planner François Leclercq, who designed the project, said that the idea was to “limit infrastructure work by reusing existing“.

An inspiration for Wandsworth Council to review existing projects?

According to Paris local authority, the new project should be “in concertation with the local residents, in harmony with the surrounding, sustainable and resource-efficient, pleasant to live in and inclusive, health-conscious and 100% reversible“.

Why is this story linked to Clapham Junction? In view of the over-developments criticized by many resident and amenity societies along York Road and the plans of redevelopment for Winstanley and York estate, a similar full review of the previous would be welcome by the vast majority of local residents.

It’s not impossible, as the proposal for Paris is showing. Wouldn’t it be an inspiration for the new Labour Council in Wandsworth?