Thermomix has opened new premises in Lavender Hill, at the corner of Beauchamp Road.

After the closure of the Corner Stone in Lavender Hill, just beside the well known Whole Foods Market (which was extended and renovated in 2019), many were wondering what was going to replace the Christian bookshop. The answer came as a surprise with the opening of a new Thermomix showroom.

The premise endured extensive interior work but the exterior design was mostly left untouched except for painting and the replacement of all the windows. They did not have the opportunity to realign the part of the shop that makes an awkward triangle with the pavement and other frontages, mainly due to the fact that they are only tenants (it would require planning permission from the landlord, a much longer process if ever possible).

Thermomix operates mainly with independent consultants (self-employed) called “Thermomix Advisors”, managing operations and earning a commission on sales. The back of the premises, which extend into Beauchamp road, is dedicated to a meeting room (with blackout windows) where advisors can have their branch meetings.

A move from Chelsea Harbour to Clapham Junction

Thermomix is a multi-purpose kitchen appliance made by the Vorwerk Corporate Group, founded in 1883 and headquartered in Wuppertal, Germany. Originally, the appliance was a mixer with multi-functionalities: stirring, kneading, chopping, grating, mixing, milling and juicing. They later added the ability to heat so it could simultaneously blend and cook (up to 120°C). Their latest model, TM6, with many features including slow cooking, fermentation and sous vide, cost more that £1000.

The premises is operated by Josie Wilkins, branch manager for Thermomix South London Branch Studio. They were previously located in Chelsea Harbour (a mainly residential location with lots of newish buildings, a marina and a little known glass-roofed mall, a stone’s throw from Imperial Wharf) where the branch opened in 2019. Unfortunately, they never got the visibility and foot traffic that was intended. Josie Wilkins said:

The large space is dedicated to demonstrations and they aim to have classes every day with different themes, from basics to curry or pizza. 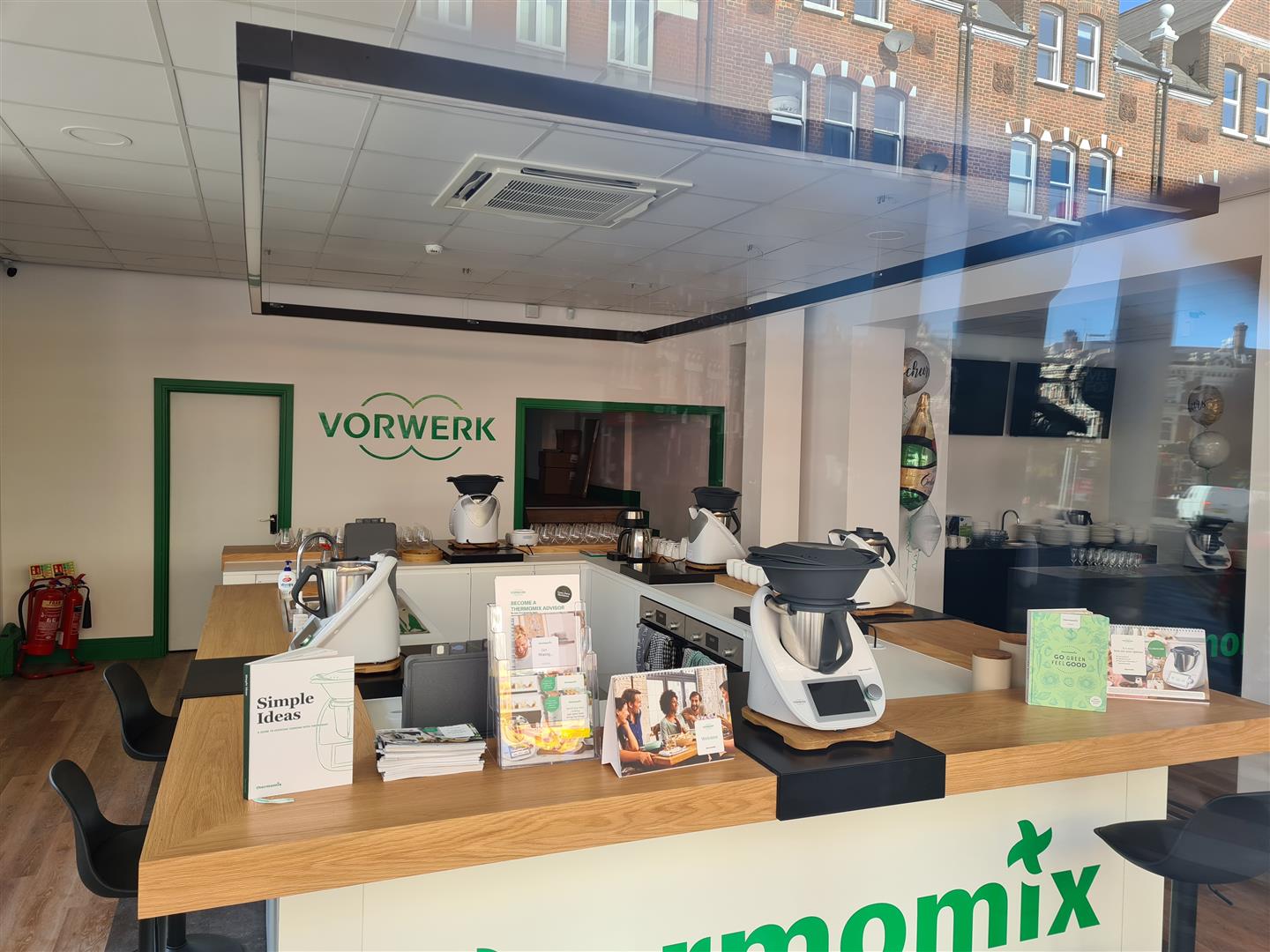 They intend to do a lot of cooking and give samples during their Grand Opening on Monday 3rd October. They will be open until 5pm. You can also find them with their Facebook page.

The Christian bookshop served the community for nearly 30 years

The location was previously occupied by a Christian bookshop, The Corner Stone.

The bookshop sold Christian books, bibles, cards, music and DVDs for over 30 years. as it started to trade in 1990 in Lavender Hill. It was operated by a couple, Brian and Ulrike Warner, what have allegedly previously worked in property management.

The premises had a narrow escape in London’s riots as two large windows and five smaller windows were smashed and a fire started, causing some £4,000 worth of damage. Fortunately the shop had the glass in the door replaced and was able to resume trading after only one day.

Huge surprise from the local residents in Clapham Junction

It was a huge surprise for many local residents. Chris Pople tweeted: “So the old Christian bookshop on Lavender Hill is going to be… a Thermomix showroom?! Didn’t see that one coming.” Brian Clivaz commented: “Wow ! Great news – it’s impossible to buy a new Thermomix at the moment due to a shortage of micro-chips !“. And other social media user said: “Quite an apposite location I suppose!!”

So the old Christian bookshop on Lavender Hill is going to be… a Thermomix showroom?! Didn’t see that one coming. pic.twitter.com/egT1K6YtwP

The Christian community left in 2021 and boards were advertising the premises since January this year. It consists of the ground floor double retail shop, ancillary storage, office space and the café at the rear. This has a combined net internal area of 1,841ft² (171m²).

The former bookshop was put on the market by commercial firm BELLS. The renting value for the year is £90,000. The online advert said that it’s a “prominent corner position“.

To be honest, the Christian book shop had never been a very popular venue and the vast majority of the time the premise was empty. With the opening of the Thermomix shop and their aim at running cooking and classes, as well as events, we expect this corner of Lavender Hill to become much more animated.