Winterville has always proved controversial. There were frequent complaints about the noise and intrusion, and there was a sigh of relief when Lambeth Council decided it was not going to agree to its return in 2019.

As a consequence, last year was Winterville free, and Lambeth were able to carry out £200,000 of works to restore the damage caused by this, and other equally excessive commercial events.

“In order to adequately restore the area which previously hosted Winterville, the Council is preparing to invest approximately £200,000 in order to carry out a refurbishment of the site area. We confirm that we are currently procuring an appropriate contractor to undertake this work.” (Lambeth Council)

The Clapham Society reported in their Newsletter:

“Lambeth have finally responded to our challenge to their use of the Common and in favourable terms. In particular, we have managed to secure their agreement not to grant licences for events such as Winterville without first seeking ministerial consent.  That gives all of us the opportunity to comment on any proposed licence before it is granted. It also appears that there are no current plans for Winterville this year, but if it does go ahead, it will be on the Circus site on West Side”.

So not reassuring news if you live near West Side, which is part of Wandsworth borough.

Winterville keen to return to Clapham Common in 2020, on Wandsworth side

Following statements in various events magazines to the effect that Winterville were applying to return to the Common, it became difficult to find out anything. This is not that surprising, given Wandsworth’s propensity for carrying out a lot of discussions behind closed doors. Anyone remember Formula E?

In the Clapham Common Management Advisory Committee Minutes of 7th November last, a resident spotted this:

‘Winterville is keen to return to Clapham Common in 2020 and talks with Wandsworth Council are ongoing re the hard standing area.’

After correspondence with Lambeth Council, she was eventually told:

“Thank you for getting in touch – yes Winterville are planning to return to the common and use the funfair site and part of the Redgra. This whole area is in Wandsworth so planning would be determined entirely by them.”

On Wandsworth’s side, enquiries were made to Enable, to Northcote Councillors and to planning officers. Their replies were conflicting, vague, and hardly reassuring.

Since this was rather vague, another resident wrote directly to Mr Granger, a planning officer working for Wandsworth Borough Council, asking for the date of the discussion, the advice given, and whether the Council would be giving permission. They later received an email from the Council Leader, Cllr Govindia:

“Wandsworth Council has not yet received a planning application for Winterville to be located on the Wandsworth administered part of Clapham Common. Please be assured that if an application is submitted, consultation letters will be sent to neighbouring residents, while site notices will also advertise an application. A press notice would also be posted in the Wandsworth Guardian.

I trust this assures you that the views of residents would be sought on the acceptability of such a proposal.”

Remembering the lack of consultation in 2014 and 2015 over FE in Battersea Park, residents were by now beginning to feel anything but reassured. Was it going to be yet another case of 1800 missing letters, and the commercial press knowing more about the event than the residents?

But just before we move on, take a look at this rather curious reply, received from Councillor Aled Richards-Jones, a Northcote Councillor on the Planning Committee. Why is this Councillor under the impression that it is Lambeth who will be applying to site Winterville in Wandsworth’s part of the Common?

“As a member of the Planning Applications Committee (“PAC”) which will have to consider Lambeth’s application in due course, it would not be appropriate for me to comment in too much detail at this stage, as PAC members sit in a regulatory jurisdiction and are required to keep an open mind in respect of applications which come before them.  However, I note your concerns and I will take fully on board all concerns if and when an application comes to the PAC. “

Should Wandsworth agree to this noisy and over large event settling down on Clapham Common for several weeks, it would be completely going against comments published in their press release in July 2016. Cllr. Jonathon Cook complained bitterly about Lambeth’s policy of allowing large noisy events on to the Common (the PR is edited but you can read the full article HERE).

Councillors in Wandsworth are voicing serious concerns over plans by neighbouring Lambeth to stage more noisy music festivals and other loud events on Clapham Common.

“I’m afraid that Lambeth is not being open and transparent about these changes. The public has been kept in the dark.

These recommendations are buried some 300 pages into a 520 page report. Nowhere does it say that we formally oppose these changes because of the impact they will have on residents living in our borough. The Lambeth report completely conceals this fact.

Their summary of the noise impact also grossly underplays the impact from extended periods of loud music….

Instead of trying to conceal the level of opposition that exists to these proposals and trying to sneak them through without the public’s knowledge, Lambeth actually needs to sit down and engage much more closely with residents who live near the common.” 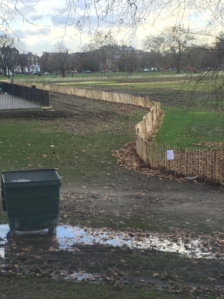 Should Winterville application comes before the Planning Application Committee at some point, we should watch carefully the outcome of the discussion.

With climate change, are we taking enough notice of flooding zones?