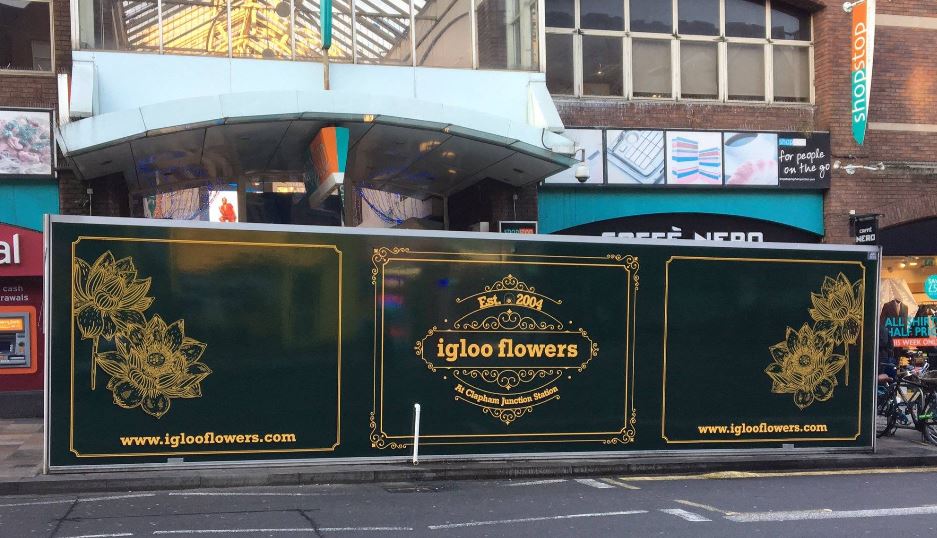 A retrospective application (2017/0146) for erection of a traditional flower stall outside main entrance to Clapham Junction Shopping Centre leading to the station was approved by the Planning Application Committee (PAC) on the 26/04/2017, against the recommendation of officer’s.The reasons found by the officers to recommend the refusal of this application was (please don’t laugh):

“The flower stall, by reason of its excessive size and bulky appearance, has resulted in an unsympathetic and overly conspicuous form of development that has resulted in less than substantial harm to the character and appearance of the Clapham Junction Conservation Area which has not be preserved.”

Seriously? Is it because the application is so small that officers find reasons to refuse, while they have absolutely not problem to support numerous awkward applications for very big and tall schemes in the area?

A flower stall has been on site for the past twenty five years and has
operated successfully during this time. Therefore, retail use at this
location is well established. A new and improved flower stall replaced the previous old, poorer quality flower stall, and it began trading on site, in March 2016.

In addition, the flower stall recently won a local award, Love Your Local’s Award, which was presented to the applicant by local MP Jane Ellis.

Thus at the same committee in April, Councillors rebelled and in an unprecedented move voted against officer’s advice twice: they approved the flower stall and refused the ludicrous scheme near Wandsworth Town station. Is it the beginning of a turn of mood in Wandsworth Council or just a hiccup?… coming months should show the way…

UPDATE 11/05/2017: We’ve received some comments on emails and Twitter, expressing the view that the application should have been turned down instead.

@c_j_a_g @WandsLS Ridiculous location. The entrance is woefully constricted as it is and this will make it even worse. #clapham_junction #flower_stall

The PAC, to my mind, made a mistake. They did not deal with the application before them, is this box acceptable, is a permanent structure acceptable, is a change of use from a market stall pitch to a permanent shop acceptable – I got the impression they thought they were being asked if they wanted to be responsible for having the lovely flower stall removed.

I must confess here that I focused much more on the technical explanation given by the officers in their report: we’ve seen rather the opposite used in so many cases by them to justify enormous and harmful schemes that would change an area for ever.

In the case of the flower stall, while few would argue against the principle of a flower stall at the station entrance, the structure can be easily changed and moved. Unlike the (wrong) statement  in the officer’s report, this is not a permanent brick-and-mortar construction.

However the location – blocking the direct view from the station main entrance – cannot be seen as appropriate. The previous old stall was much smaller, and although not ideal, more sympathetic in term of dimension.

In order to mitigate the problem, a condition has been added to the approved application, which should limit the permit to 5 years:

Some pointed out the better display offered by South Kensington or Balham stations; unfortunately Clapham Junction, although one of the busiest station in Europe with millions of passer-by each year, does not have any large outside square and space in its current layout.

It is a shame that the location of the flower stall was not discussed and resolved when the exemplar scheme (revamp of Clapham Junction street-scape) was decided in 2010.

Unless a spot is found inside the current entrance/shopping centre, it is likely that the situation will rely on future major changes for Clapham Junction station (apparently Network Rail is working on some plan, as part of the Crossrail 2 extension …to be implemented in 20 years!).

It is an occasion to have a look at CJAG’s proposals for the redevelopment of Clapham Junction station as published in 2011.