After 44 years of control by the Conservatives party, Labour has won a majority of councillors in the local elections on 5th May 2022.

What was largely expected happened on May 5th: Labour won an overall control of Wandsworth Council, after 44 years in opposition. The “favourite council” of Margaret Thatcher turned red as the election results were declared last week: with 35 Labour Councillors and 22 Conservatives, it was not at all the tight result predicted the week before by Simon Hogg, the new leader of the Council.

How good to welcome the amazing Angela Rayner to our campaign in Wandsworth this evening!

This election couldn’t be tighter – is going to come down to a handful of votes in a few key wards.

🌹 Vote Labour on May 5th to get the same low Council Tax, with better local services pic.twitter.com/NUG5ToD0Ib

Back in 2018,  Simon Hogg was also leading the campaign but while Labour won the most votes over the borough (42,401 for Labour, 399 more than the 42,002 won by the Conservatives), they did not manage to win key marginal wards and lost by a few votes.

However, as you can see in the graph just below, the trend was much in favour of Labour. In reality, not winning Wandsworth would have been a huge disappointment and probably a local earthquake for the local party branch.

Ravi Govindia took over the role of leader under the Conservatives grasp in 2011 (his predecessor, Ed Lister, went to City Hall as deputy Mayor in charge of policies after followed Boris Johnson election) but did not manage to reverse the trend that saw the Tory majority continuous shrinking in 2014 and 2018.

While the local Labour tried to link the Council to the fate of Boris Johnson that argument has yet to show any relevance. Looking for reasons, The Telegraph wrote:

“‘Partygate’ and the cost-of-living crisis may have been factors, but the loss of Wandsworth seems, on the face of it, to be yet another ripple from the fallout of Brexit and Boris Johnson’s transformation of his party”

During the campaign, the Conservatives party tried to distance themselves from central government, branding themselves as “Local Conservatives” and replacing the usual blue colours of their leaflets by a green background.

Their main message (if not the only one) was on the Low Council Tax, which the Labour strategists tried to copy, maybe thinking that it was the only thing that resident cared about (usually it’s not a very good tactic as it’s often circumvented by opponents saying: “if you want it, vote for the original, not the copycat”).

Our local experience and discussions during the campaign seem to point more to a disillusion of the old and continuously reused “Low Council Tax” argument, to the expense of always more and more dissatisfied local residents who have had the feeling of being constantly ignored by the Council.

The Conservatives will have to think seriously about the reasons of their defeat. So far, it seems that they have still a long way to go before they really understand what happened. Ravi Govindia said to the BBC:

“We have done exactly what the residents of Wandsworth wanted. To find that counts for nothing is a sad reflection of the importance of local government not being recognised.”

Local elections are defined with their name: they are local! Main newspapers such as The Telegraph seem to miss the point, trying to relate everything to national politics, writing:

“Looking at Wandsworth Council, it’s hard to argue that the result had anything to do with local issues.”

With the same analysis that lead most of the national media to miss the Brexit vote eight years ago, here again we observe that their journalists fail to grasp the real mood of the local population.

Here is an animated map of the changes in Wandsworth borough elections since 2006.(*) – click on the image to see better (due to the electoral reform last year, boundaries have changed for most of the wards and therefore the map looks different).

See the different maps below:

You will find on the Council website the election results, with all details by ward.

All the parties got a massive boost of votes due to nearly 50% more ballot papers than 4 years ago, showing the interest for this election. 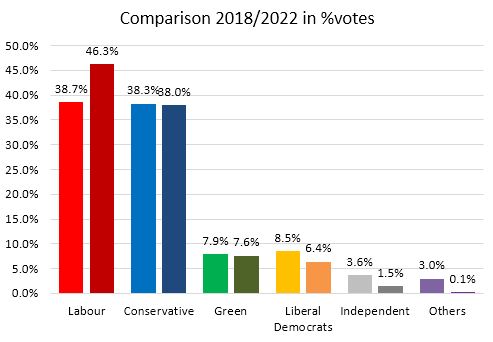 When comparing with the previous results, we observe a large increase of Labour votes, taking from all other parties, mainly Liberal Democrats, which have been pushed to the 4th position, behind the Greens.

NB: The large amount of other candidates in 2018, especially taking into account the Renew party, which made 2.3% of the votes in 2018 and has now disappeared, makes a simple swing analysis uncertain.

Local Election: an opportunity for CJAG?

Alton Estate, a remake of the Winstanley and York estate regeneration failures