In 2015 Wandsworth Council distributed a Planning News leaflet called “Battersea Riverside Consultation” asking for opinions on their planning framework to guide the development of the Lombard Road/York area. Although the final policy ignored the consultation comments, the latest proposals for the area show that the full procedure (including drafting the policy itself!)  was just a waste of time and money and – as usual with Wandsworth planning policy – is meant to be ignored. 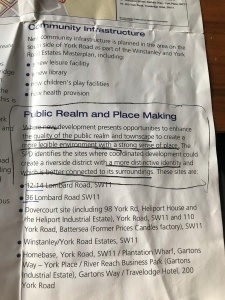 As one local resident said (quoting some parts of the leaflet): “This appeared initially as an enlightened blueprint aimed at coordinated development in North Battersea while imposing a severe limit on the proliferation of large towers. It earnestly brims with a desire to put the opinions of local people at the heart of decision making and that “rather than allow a series of piecemeal developments” it prefers “a strategy which would coordinate development” in order to “enhance the quality of the public realm and townscape to create a more legible environment with a strong sense of place.”

In December 2015 the final planning document (Supplementary Planning Policy – SPD) was approved, similar to what was displayed for consultation (here you may wonder the point of consultation rather than a tick in the right box!)

Policy says: none of the area good for tall building, so ignore it! 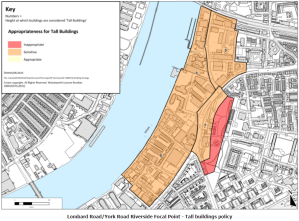 The final SPD present a map of where tall building would be appropriate, sensitive or inappropriate. None of the area is appropriate to tall buildings, according to the Council policy. It says:

Out of the focal point, the size to be considered for building is 5 storeys.

” It looks to be a blanket policy to designate the whole part of Wandsworth borough as free land for major developments.”

We later published a full analysis of the proposal and the detrimental effect it will create for the area. We objected on the plan for the following reasons:

– Most of the area has already been granted or recommended approval for redevelopments of very tall and massive constructions.
– The cumulative impact is not considered.
– Public realm improvements are already ignored in granting applications.
– This looks like an attempt to complement all land between Clapham Junction and Wandsworth town centres and set up a blanket policy to transform the full area into a high-dense and tall buildings zone without resident consent.

“It reads as a post hoc policy justification for decisions taken over the past two to three years under pressure from developers to maximise site values through overdevelopment and tall buildings.”

Run a consultation, then ignore it to draft the policy you want, and finally ignore that policy!

Although we criticised the SPD, it was approved in 2015 and since must be used as a framework for the development proposals in the area.

However, the Council is still very keen to ignore its own policies when they contravene its own plans. We have superposed the SPD map of “sensitive” and “inappropriate” tall building to the proposal that the Council has approved for Winstanley & York redevelopment.

As you can see with the picture above, ALL the buildings are in breach of Wandsworth adopted policy. As for the SPD Focal point area, what is the point to designate an area as “inappropriate” for buildings above 8 storeys, just to grant permission for a 20 storeys?

Wandsworth planners seem to be very confused with the definition of sensitive and inappropriate. As a reminder in nowadays English (Collins dictionary):

Sensitive = A sensitive subject or issue needs to be dealt with carefully because it is likely to cause disagreement or make people angry or upset.

Inappropriate = Something that is inappropriate is not useful or suitable for a particular situation or purpose.

As they tried to explain to the government inspector back in 2015, inappropriate in Wandsworth newspeak “does not define any areas of the Borough where tall buildings will always be inappropriate” [2015-Council statement 2.10]

In 2015 it became so ridiculous that the government inspector report said that Wandsworth Policy documents was ineffective.

According to the Council, the enlightened ideals of Planning News have since “evolved”. (they do like their George Orwell newspeak). If that is the case why weren’t we informed of this sea change? Why did the council solicit our views in the first place, presumably at our expense, only to so blithely ignore them? And what is the real agenda behind the drive to push through this lamentable Croydon-isation of Battersea?