Finally, after 4 years of work on the Winstanley and York redevelopment project, and as local residents expressed the wish of less towers in the 2013 consultation, the Council is proposing a 20 storey tower in Grant Road, the tallest building in the area so far.

Planning Application 2017/6864 is proposing the construction of 3 buildings ranging from 6 to 20 storeys including a total of 139 residential units, a 5175sqm School and Chapel and 219 sqm of flexible commercial uses, car parking, the realignment of Thomas Baines Road and other associated works.

The site is currently mainly occupied by a car park, grass and open areas. The scheme will result as a loss of the most important trees, especially located on the site of the proposed tower.

If all goes as planned, the scheme should be approved just before the local election, and therefore giving the go-ahead to the plan for transforming the area into a cluster of dense and tall building, making the high tower a precedent that the next application could follow, whatever is the outcome after May.

In the Affordability report, we can read that the Applicant (i.e. the Council) proposes to provide 46 affordable residential units within a single building (the lowest block on the corner of Plough Road – the tower won’t have any) which equates to 33% by unit numbers and 31% by habitable rooms. The 46 affordable units are proposed to be provided as social rented tenure, which is very welcome. Rent levels will be set by the Council and will reflect the existing rents of those residents being relocated.

In order to highlight that it cannot go further (London’s plan specifies 35%), the report says “the provision of 33% affordable housing therefore creates a viability deficit“.

The Design Review Panel is less than enthusiastic about the proposal. In their report, they write:

“we would have liked to have seen greater clarity of how this [first phase of the Winstanley/York Road Masterplan] fits into the broader landscape strategy, particularly the ambitions for Grant Road. […] We feel the schematic proposals for this block clearly show it has been less well considered and needs more work to improve its urban response and architectural quality”.

Specifically on the building along Plough road they say:

“It would appear that the architects have been given insufficient time to prepare a scheme and the evidence from the submission bears this out.”

However the panel is comfortable with the massing and height of the proposed 20 storey tower and they see it as announcing the future of the masterplan:

“We feel the proposed tower works in the townscape as part of the unfolding sequence of towers on the approach to Clapham Junction station.” 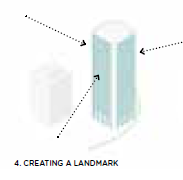 In their documents, the applicants (i.e. Council’s team) are presenting the tower as “a landmark” and “a key marker to the station entrance“. All usual arguments to justify towers in the borough.

Arguments from residents against towers dismissed

The Winstanley& York regeneration team presented their scheme during one of the recent exhibition. Labelled as a “consultation” in their document, no comment from the residents were taken into consideration to modify the proposal.

“The 20 storey tower block next to Clapham junction station is an eyesore. It is without any visual attraction and will tower over an area of “people-height” buildings in what Wandsworth council promotes as “your town centre.” A lot of us have stayed and been part of an antisocial community- was hoping for a lot more low rise properties with gardens.”

Other objections displayed on the Council’s website are showing similar discontent:

Response from the developers:

“The site has been identified as one with the potential to deliver a tall building due to its proximity to Clapham Junction Station. This is supported by local and national planning policy and the design approach is endorsed by the GLA and Wandsworth’s Design Review Panel.”

In other words, thank you very much for your comment but we don’t care, we know better what is good for you!

Of course it echoes the treatment given to the initial consultation (2013) for the future Winstanley&York estates. According to the booklet produced by the project teams-open-day-exhibition-boards in 2013, the number one thing that residents wanted to change was: Improved homes with fewer towers

Many objections have also been submitted from residents directly affected by the new 6 storey building proposed on the corner of Grant Road and Plough  Road:

While elements highlighted by the Design Review Panel show that the Council is rushing out to get that application approved by its committee before the May local election, the decision bears very little suspense:

Update 10/07/2018: The planning application was approved at the Committee meeting on 22nd March 2018. The Labour councillors raised a lot of questions regarding land value and viability. Councillor Belton noted that these concerns had been raised by the Design Review Panel and suggested that it would be appropriate to defer this application to allow more time to review the design.

The Chairman (Cllr Sweet) asked officers to provide some more detail regarding the viability of the proposal and the relationship of the proposal with Time House. The Housing Development Manager explained that the viability assessment was undertaken by consultants and that their approach was consistent with the Mayor of London Supplementary Planning Guidance (SPG) and the draft London Plan in relation to affordable housing viability. The Housing Development Manager noted that it was not possible to put an existing use value on one parcel of land which was a landscaped area and it was explained that, in this situation, the Supplementary Planning Guidance (SPG) stated that an alternative use value should be applied. It was explained that it was possible to determine the existing use value of the other parcel of land as it was a car park that generated income and that this land value could be calculated based on comparable uses.

Later in the report he even said that “the scheme actually resulted in a deficit against the existing land use value”.

Councillor Belton noted that Block A was a tall building but that he had been persuaded that it was acceptable in the proposed location. However, he noted that the design of Block A still required some amendments and suggested that the Committee should defer the application.

According to the minutes, nobody opposed the application (which is not saying that it was unanimously supported).